Here is everything you need to know coming out of the July 10th edition of SmackDown:

– Bray Wyatt vs. Braun Strowman from Money in the Bank aired

– The New Day vs. Shinsuke Nakamura & Cesaro for the SmackDown Tag Team Championship ended in double DQ when the teams introduced tables into the match

– Next week’s SmackDown will feature Matt Riddle vs. AJ Styles for the Intercontinental Championship.

– It looks like The New Day vs. Nakamura & Cesaro will go down in a Tables Match at Extreme Rules, but that has not officially been announced. 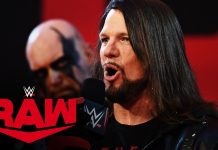 Seth Rollins To CM Punk – “HELL Of A ‘Response.’ Coward.”