– Extreme Rules has been dubbed Extreme Rules: The Horror Show because Bray Wyatt will face Braun Strowman in a cinematic match known as a “Wyatt Swamp Fight.” Bray Wyatt is said to be heavily involved in setting up this match alongside Jeremy Borash. Strowman’s Universal Championship will not be on the line, but there’s expected to be more “action” compared to Wyatt’s Firefly Fun House match against John Cena.

– Friday’s SmackDown was largely rewritten in wake of the positive COVID-19 cases breaking out within the company. It’s unknown as of this writing which talent have tested positive, though there were several top stars absent from Friday’s taping, namely Daniel Bryan, Sheamus, and Intercontinental Champion AJ Styles.

– Despite half of SmackDown being filled with a tribute to The Undertaker, Friday’s show drew 2.173 million viewers. This was up from last week’s 2.089, making it the highest since April 17. The first hour, which featured a replay of the Taker/Styles Boneyard Match drew the highest viewership with 2.271.

– Gary Cassidy reported on Friday night that King Corbin isn’t happy with the planned Matt Riddle feud. Corbin feels like Riddle needs to go through “five enhancement talents” before working with him. It’s being said that Corbin vs. Riddle has been planned internally for months, but Corbin just recently found out when Riddle debuted on SmackDown.

– Even though Florida’s COVID-19 cases are still on the rise, WWE is said to be planning a show with fans in the sunshine state in the coming months. Fightful Select reports that the company is aiming for a weekend taping in July at the RP Funding Center in Lakeland, an 8,000-seat venue that ROH has run before. Social distancing rules would be implemented if this comes to fruition.

– An anonymous WWE development talent spoke to WrestlingINC in detail about their experience working TV tapings at the Performance Center. The talent claims that WWE does not want anyone to publicly announce if they test positive for COVID-19, although non in-ring talent Renee Young, Adam Pearce, Kayla Braxton, and Jamie Noble have already done so. You can read the full statement here.

– Randy Orton reportedly wants to work with a handful of top NXT talent, specifically Tommaso Ciampa. There’s a chance this feud could play out on both Raw and NXT, similar to Charlotte/Ripley, but there’s no word yet on if that will happen. Orton is also being considered to challenge WWE Champion Drew McIntyre at SummerSlam.

– The June 29th episode of Raw is supposed to be taped on Saturday after being postponed on Friday.

– The New Day have officially hit the six-year mark as a faction. They are now considered to be the longest-tenured group without a breakup.

– Former NXT star Cezar Bononi was in the crowd for Wednesday’s Dynamite. When a new face is used in the crowd, it typically means they worked a Dark match. Bononi is not advertised for Tuesday’s Dark as of this writing.

– Hangman Adam Page is currently off Twitter with all the negativity that is going on right now.

– Anna Jay, Lee Johnson, and Alan Angels were among the names that were asked not to attend AEW’s tapings this past week. All three are trainees at QT Marshall’s gym. Marshall did not compete as advertised because he came in contact with someone who tested positive for COVID-19.

– Click here for the current advertised cards for both nights of Fyter Fest.

– Following the news that Michael Elgin will no longer appear on Impact Wrestling programming, Fightful Select reported that Elgin and Sami Callihan were recently involved in a backstage fight that had to be broken up by Scott D’Amore. Elgin and Callihan were in disagreement about how to start their triple threat match involving Ken Shamrock.

– There’s conflicting reports on whether Impact fired Tessa Blanchard, or if her contract ended and the two sides were unable to work out a new deal. Fightful Select reported that Blanchard’s contract was set to end on June 30, just weeks before Slammiversary. It was very likely that Blanchard was going to come in to drop the title in the pay-per-view main event before departing.

– Impact still has not announced a new main event for Slammiversary. At this point, Eddie Edwards, Trey, and Ace Austin will compete in a three-way to crown a new World Champion. There’s speculation that Impact could add two new people to the match, but that has not been confirmed. 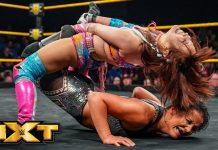 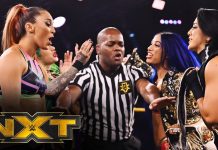