– The July 3rd edition of Friday Night SmackDown drew a record-low rating on FOX with 1.776 million viewers. The first hour was wrestling-heavy with Matt Riddle vs. John Morrison and AJ Styles vs. Drew Gulak, but the show ended with a “toast” segment between Sheamus and Jeff Hardy.

– There are plenty of rumors going around regarding Kairi Sane’s future in WWE. The Wrestling Observer suggested this week that she was scheduled for an injury-forced retirement angle that would involve Asuka’s SummerSlam opponent. Fightful Select reported on Wednesday that there were rumors of Sane to returning to Japan to serve as a WWE ambassador. Sane is currently advertised to appear in Asuka’s corner on Raw, but her future in WWE is still in question.

– PWInsider broke the news on Friday that WWE is now enforcing a mask policy for TV tapings at the Performance Center. Those not working on-air roles caught without a mask will face a $500 fine for the first offense, and a $1,000 fine for every occurrence after.

– Shad Gaspard’s autopsy results came back this week. His tragic death has been ruled an accident via drowning.

– There are reports that Vince McMahon has soured on Shayna Baszler. This news, coupled with the fact that Paul Heyman is no longer in charge of Raw, could explain her absence from TV.

– As of this writing, the next NXT TakeOver event is still slated to take place the night before SummerSlam on Saturday, August 22nd. It remains to be seen if these events will take place at Full Sail University/WWE’s Performance Center or if fans will be allowed in.

– Ember Moon revealed this week that she may need a second surgery for her Achilles tendon injury. She also told Comic Book that her surgeon believes she may have been wrestling on a torn Achilles for two months before she was sidelined. There’s currently no timetable for her return.

– Mickie James told Chris Van Vliet that she was weeks away from being cleared from her ACL injury when the pandemic forced shut downs around the US.

– AEW had a select number of fans in the crowd for Fyter Fest, per Pro Wrestling Sheet. The report states that there were around 60 or so Daily’s Place/Jaguars sponsors who were allowed to sit in the upper bowl after signing waivers. These fans did not undergo COVID-19 testing, but were placed in the upper bowl away from the AEW talent and crew who had been tested.

– AEW has issued a storyline suspension and fine to Jake Hager for his actions against a referee following his loss to Cody at Fyter Fest.

– As expected, AEW’s shows in Philadelphia and Boston have been postponed again to April 2021.

– The July 7th episode of Impact will have a special start time of 9pm ET due to a Ringo Starr birthday event airing on AXS TV at 8pm.

– Impact revealed that June 2020 was the best month the company has ever had for YouTube streams. The arrival of new stars and teases of debuting/returning talent certainly helped in the build for Slammiversary.

– 5 matches are now confirmed for Slammiversary on July 18th. Click here for the current card. 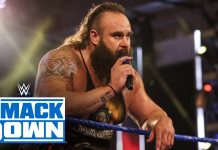