After Becky Lynch defeated Asuka to retain her Raw Women’s Championship, Baszler ran through the crowd and attacked Lynch from behind. Baszler took her mouth guard out and bit Lynch on the neck to finish her assault.

♠ SHAYNA CAME TO PLAY. ♠@QoSBaszler is on #Raw making a STATEMENT at the expense of @BeckyLynchWWE! pic.twitter.com/YWadnRnNpB

Lynch is expected to defend against Baszler at WrestleMania 36 in April. 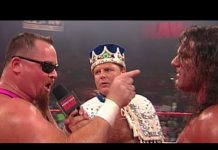 MAJOR Name Being Inducted at This Years HOF