Last week, Luchasaurus had a snarky response on Twitter to an account that claimed he is expected to be out for at least three to six months with a torn hamstring.

The injury is actually believed to be a strained hamstring and he could return in a matter of weeks, not months.

For those that missed the story last week, here’s the tweet again: 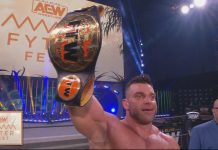 AEW Dynamite Extended Through 2023 On TNT